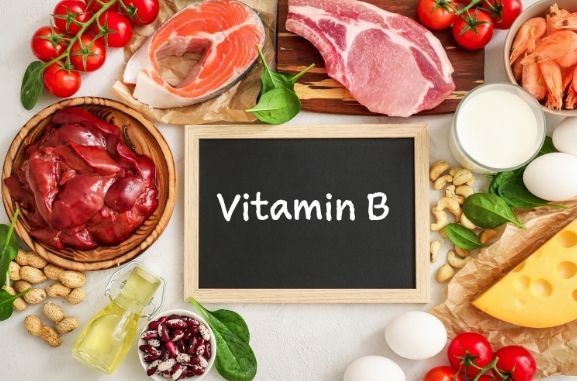 What are the B-vitamins?

Just when you thought you had gotten grips on all the vitamins and minerals, we open up one of them to reveal another eight sub-vitamins! Sorry!

But yes, the B-vitamins are a class of water-soluble vitamins. They are crucial for a myriad of biological functions such as energy production, immune system support, and nerve function to name a few.

Key Health Aspects of the B-vitamins

It would be impossible to generalize a couple of key aspects of the B-vitamins as a group because they each play various roles. So instead, let's look at each one a little more closely. The following information was adapted from The National Health Institute (Source: NIH.uk) and Examine (Source: Examine.com).

Thiamin is found in nuts, legumes, fortified grains, and peas. It functions in the release of energy from our food and supports nerve function and nervous system health.

This vitamin can be sourced from dairies, such as milk, yogurt, cheese, but also from fortified grains and mushrooms. It is essential for the maintenance of skin, eyes, and as well for the release of energy from our food.

Niacin is so nice! Just kidding, but actually, niacin may be important for regulating mood and cognitive function. Those are more exploratory avenues in the research, however, and niacin is more well known for its role in facilitating energy release from food. You can consume niacin in animal foods such as meat, dairy, or eggs.

Again, this B-vitamin is also an important cofactor in a series of enzymatic reactions. In this way, it aids the extraction of energy from food and putting it to use throughout the day. Foods rich in vitamin B5 include animal meats and dairy

This B-vitamin is found in many foods including poultry, pork, fish, oats, bananas, and fortified grains.

Biotin is a B-vitamin that is needed in much smaller amounts than the others. It is important for the production of fatty acids by the bacteria in the digestive tract.

This is one of the most important B-vitamins, especially for pregnant women. There are two forms, folate (the natural food form) and folic acid (the synthetic form). Despite what you may think, it is actually the synthetic form that is much more bioavailable in the body. Folate is crucial for the formation of red blood cells, and for healthy neural tube formation in the fetus.

The best sources of folate (natural form) are dark, green vegetables such as spinach, kale, broccoli, and Brussel sprouts. It can also be sourced from fortified foods such as cereals and other grains.

This is another biggie! Cobalamin is the last of the B-vitamins and is one that is often under-consumed in a variety of different groups. One of these groups is plant-based eaters. Because there is virtually no plant-based source of cobalamin, it can be extremely difficult to reach your daily needs, if vegan or vegetarian, without supplementing.

Vitamin B12 (Cobalamin) can be found in animal foods such as red meat, poultry, dairy, and eggs. It is crucial for healthy nerve function, energy production, and the formation of hemoglobin.