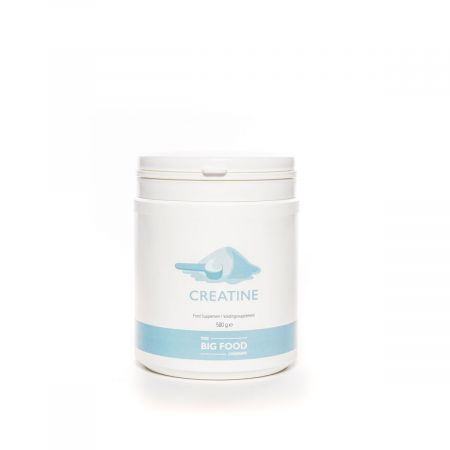 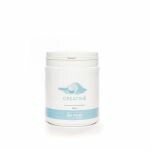 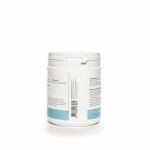 Big Food Creatine is a natural & vegan-friendly creatine supplement, manufactured in a clean & safe facility in Europe. It contains Creatine that can help maintain and increase your muscle creatine and help provide constant energy to your muscles.

It is the newest addition to our renowned range of high-quality supplements! Creatine is a natural compound naturally produced in the liver, kidneys and pancreas. Creatine is currently the most well-studied and well-proven ergogenic aid for athletes of all levels. It has also been shown to be completely safe in all populations.

Your entered quantity is not in stock, the quantity has been adjusted.

Or take advantage of our stack discount

You save 2%
You save 4%
Safe and trusted checkout
24,95
Directly Available
Order before 22:00, Shipped today
Secure shopping
Details

What is Big Food Creatine

Big Food Creatine is a natural & vegan-friendly creatine powder supplement, manufactured in a clean & safe facility in Europe. It contains Creatine that can help maintain and increase your muscle creatine and help provide constant energy to your muscles.

Creatine is an effective way of giving your muscles "quick bursts" of energy during high-intensity exercises of 5-10 seconds. This can be helpful in sports such as sprints, football, wrestling, baseball that need immediate energy and have sudden movements (Source:Science Direct).

Why Big Food Creatine is Perfect for Vegans

Naturally, our body creates about 1-2 g of Creatine, and approximately 95% of Creatine is stored in your body's skeletal muscle and is used during physical activity. (Source:Cleveland).

However, we get the amino acids to build Creatine from foods such as milk, red meat, and seafoods which strict Vegetarians don't typically consume. This is why Creatine and Phosphocreatine is lower in muscles of vegetarians, especially those who have been under strict plant-based diet for years.

Studies show that including creatine supplementation in a Vegan’s diet, has been proven effective in increasing Creatine muscle stores, and improving physical performance, and endurance to resistance training especially to Vegans who do recreational sports and activities on a regular basis. Examples of these activities include: walking, jogging, swimming and cycling.

In addition, supplementing Creatine in a Vegan’s diet can help enhance the brain’s memory and function since the brain is also dependent on phosphocreatine as its energy source.

Why Big Food Creatine is perfect for Athletes

Taking Creatine orally can help athletes supply Creatine to their muscles for the ATP-creatine phosphate pathway. This system has been studied to be the fastest way to regenerate adenosine triphosphate (ATP) in the muscle and also:

This can be beneficial for high-energy resistance and high-intensity interval training. (Source:Science Direct)and activities such as:

Not all Creatine supplements are created equally

Big Food Creatine is a Creatine supplement of high-quality level. It’s created in a manufacturing facility in Europe where the production process follows HACCP (Hazard Analysis and Critical Control Points) to control the health risks during production. The process of creating Big Food Creatine is continually monitored, well-documented, consistent, and reliable.

In creating Big Food Creatine, we use the best and safest method to minimize the risk of contamination. We make sure that the product is free from DHT (Dihydrotriazine) substances which can be cancerous to consumers.

The EFSA (European Food Safety Authority) recommends that a Creatine product should not exceed these levels to ensure quality and safety from impurities:

However, 20 different Creatine products exceeded the recommended levels by the EFSA, while Big Food Creatine remained below these levels.

Big Food Creatine is One of the Purest Source of Creatine

According to studies, Creatine can help:

A vast number of studies have shown that supplementation with creatine can reduce fatigue and improve performance in high-intensity performances, and repeated bouts of exercise.

Several studies have shown that regular creatine supplementation can improve recovery from high-intensity exercise and improve performance in subsequent bouts. (Source:JISSN.org) As mentioned, creatine provides the most rapid source of ATP (energy for our cells) during short, intense bouts of exercise. However, this storage pool depletes rather quickly and requires time to build back up. Supplementing can improve the rate and efficiency of this restorage process.

Aside from elite team and athletic sports, the most common use of creatine is definitely within the bodybuilding and weight lifting communities. This is due to the ample studies advocating the efficacy of creatine for improving maximal power output.

In a large-scale meta-analysis, which is a review of many controlled trials, creatine was reported to improve strength by 12% and power by 12% during a regular training regimen.

One of the most well-studied and consistent findings in creatine research is the impact it can have on weight gain, particularly lean mass (muscle). (Source: Examine.com) It does this through increasing the water-holding capacity of muscle and so usually leads to considerable weight changes in the initial weeks.

In addition, daily creatine consumption of 3 g can enhance the effect of resistance training on muscle strength in adults over the age of 55 (Source:EFSA).

How to use Big Food Creatine

Take one 3–5 gram scoop each day (in a single dose) for the duration of the supplementation period. (Source:JAPPL)

Store in a dry place at room temperature, away from direct sunlight and heat.

Dietary supplements are not a substitute for a varied diet.

Plent B.V. cannot provide (complete) information here on all applications of this product. In accordance with the law, we keep that information separate from the promotion of our products.

For questions, please call us during office hours on +31 (0)85 - 060 8765. You can also search online for more information about the application and possibilities of this product.

PLEASE NOTE: it is possible that the packaging of a product does not fully correspond to that on the online images due to adjustments by suppliers. However, the product itself is the same.

That's why you shop at Plentbased