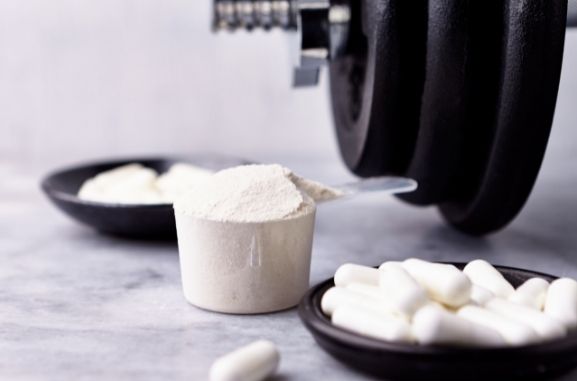 BIG FOOD creatine is the newest addition to our renowned range of high-quality supplements! Creatine is a natural compound naturally produced in the liver, kidneys, and pancreas. Contrary to popular belief, creatine is not a steroid or harmful, but rather one of the most researched, effective, and safe supplements on the market! (Source: NCBI)

Creatine consists of three amino acids. It is obtained from our diet, mainly from red meat and fish. Strict vegetarians and vegans therefore naturally have a low creatine intake because plants contain only trace amounts.

Should Vegans Take a Creatine Supplement?

For the reason above, vegans and strict vegetarians totally dependent on supplementation with creatine (see above). That's why people who follow a plant-based diet also have the most to gain from creatine supplementation. They have less creatine in the blood and muscles, the places in the body that respond best to creatine absorption (Source: NCBI ).

What does creatine do?

We, humans, need the energy to do everything from the functioning of our organs to athletics and sports. This energy occurs in our body in the form of ATP (Adenosine Triphosphate) and our body has many ways to make it. The fastest method is from the phosphocreatine system which is dependent on creatine in the body. This can support the rapid replenishment of ATP for our working muscles.

What are the reported benefits of using Creatine?

Yes. Creatine is shown to have a stellar safety profile in a host of different populations. According to sources, the reason it has previously been labeled as "dangerous" or "risky" is due to the fact that people incorrectly categorize it as a similar product to performance-enhancing drugs. (Source: Examine.com) However, this view is completely false, and creatine is formed from two amino acids and is completely natural.

Another reason for the misunderstood safety profile of creatine is due to the impact it may have on creatinine levels in the body. Elevated creatine levels can be a sign of suboptimal kidney function or the presence of a disorder. Creatinine is also the byproduct of creatine breakdown in the body. Therefore, elevated creatinine levels may be elevated when supplementing with creatine. However, this is not worrisome because it is directly related to the creatine supplement. Several recent studies have shown that there are no kidney-related risk factors of creatine supplementation in healthy people (Source: JISSN.org)

As mentioned earlier, creatine is the most well-studied sports supplement on the market today. There have been over 600 well-controlled studies examining the ergogenic potential of the compound. Based on these studies, we have compiled a list of the most commonly reported benefits of creatine. Many of these have been adapted from the Journal of the Society of Sports Nutrition position stand on creatine (Source: JSSN.org)

A vast number of studies have shown that supplementation with creatine can reduce fatigue and improve performance in high-intensity performances, and repeated bouts of exercise. It does not provide performance benefits in low-intensity, endurance exercise, however.

Several studies have shown that regular creatine supplementation can improve recovery from high-intensity exercise and improve performance in subsequent bouts. (Source: JISSN.org) As mentioned, creatine provides the most rapid source of ATP (energy for our cells) during short, intense bouts of exercise. However, this storage pool depletes rather quickly and requires time to build back up. Supplementing can improve the rate and efficiency of this storage process.

Aside from elite team and athletic sports, the most common use of creatine is definitely within the bodybuilding and weight lifting communities. This is due to the ample studies advocating the efficacy of creatine for improving maximal power output.

In a large-scale meta-analysis, which is a review of many controlled trials, creatine was reported to improve strength by 12% and power by 12% during a regular training regimen.

One of the most well-studied and consistent findings in creatine research is the impact it can have on weight gain, particularly lean mass (muscle). (Source: Examine.com) It does this by increasing the water-holding capacity of muscle and so usually leads to considerable weight changes in the initial weeks.