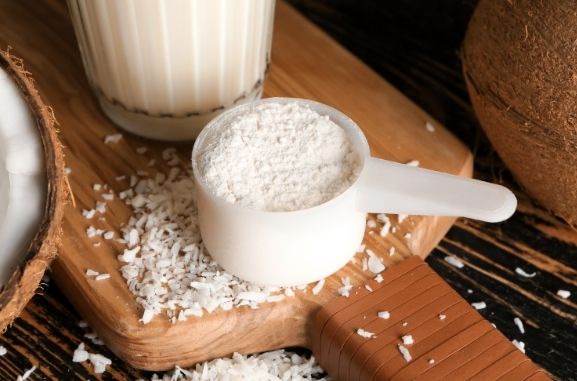 Casein is the other form of protein, alongside whey, that is formed during cheese production. In fact, it makes up approximately 80% of cow milk proteins, while whey makes up the remainder. The main difference from whey is that it is insoluble, which means that it cannot dissolve in water very easily. (Source: Examine.com)

Casein is known as a slow-release protein that provides a long-lasting and steady supply of all the essential amino acids to your muscle tissues. This can support optimal muscle recovery and growth.

What is the difference between Casein and Whey Protein?

Casein is similar to whey protein and is actually sourced from the same raw material, which is the byproduct of cheese production. While whey protein makes up about 20% of this top foamy layer, casein makes up the other 80%. Casein is known to insoluble which means it takes a lot longer to digest and absorb than whey.

Should I take Casein before bed?

Casein is a great option for nighttime because it is slowly released into the bloodstream and circulated to our muscle tissue. Make sure you are hitting your daily goals first, and after you have accomplished this, add a delicious casein shake before bed for optimal gains!

Casein is one of the highest-quality protein sources available in the human diet. It contains all of the essential amino acids, including the three BCAA's of leucine, isoleucine, and valine. These are known as the 'rate-limiting' amino acids that are crucial for the "switching-on" of the muscle-building process.

While whey protein boasts a slightly better protein-synthetic effect (Source: NCBI), casein is widely popular as a slow-release protein. Because of the poor solubility, it takes longer to digest and enter the bloodstream. This means that several hours after consuming the protein, the muscle will still be receiving the essential amino acids.

This makes the protein a fantastic night-time shake, especially for those that have difficulties with gaining lean mass. It can also be used as a between-meal shake, to provide a steady-state provision of amino acids between feedings.

Casein is also a rich source of highly bioactive peptides, which become active once broken down, digested, and fermented in the digestive tract. (Source: NCBI) These peptides may have a range of beneficial impacts in the body including antimicrobial, antioxidant, and immune-supporting functions. (Source: NCBI)